UFOs are all over the place! – Alien or government? 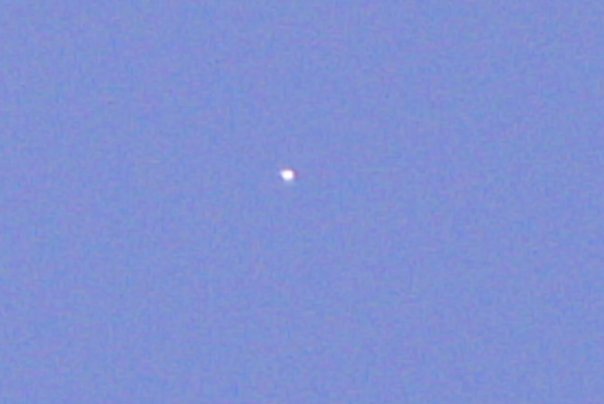 30 Oct UFOs are all over the place! – Alien or government?

Ascension and UFOs. There are UFO reports all over the media at the moment, and hundreds of posts on youtube with footage of unidentified flying objects.  A lot are different from the “usual” footage as they show “fleets” of objects in the sky.  So, are they new flying machines that our governments have been hiding from us and now are showing us to get us used to the idea (whether true or false) that there are aliens about to contact us?  Or are they extra terrestrial entities showing themselves to us?  And why is this relevant to Ascension?

The photo on the right was taken by me last September, while chatting with my daughter in our backyard.  The object flew at a “normal” speed, then slowed down above us, changed direction, then stood still for about an hour, after which it sped away at a tremendous speed, much faster than any plane I have ever seen.

One thing is for certain, there are objects flying in the sky that we can’t identify.  At the moment there are movies about alien species trying to take something from us, either water, life, or even the planet. But we’ve had these movies for decades, what’s different this time is that there are a LOT of them coming up, as well as a continuous feed of tv shows depicting the same subject.

There is a very interesting theory going around the internet called “Blue Beam”.  This theory says that the powers that be are planning on fooling us all with mass landings of craft, which are of human origin, plus perhaps some from not so friendly (to the masses) aliens who made deals with our governments, to create a huge emotional and religious experience which they will use to keep the human collective enslaved.  This is a summary of the theory, if you want to know more, and how it is supposed to happen, google the words “blue beam”.

Yet another theory is that they are here to tell us that we are in fact their petri-dish experiment.

And yet another, is that as the human collective and Earth ascend in awareness and evolution, we are now able to see other dimensions and we can perceive, and record, these crafts more easily.

How does this affect our ascension process?  Well, the shift is occurring, whether we like it or not.  Where we are when it culminates either next year or the year after depends very much on how much negativity we have processed before then.  The main forms of negativity being fear and anger, but also encompassing victim consciousness and wanting to be saved by an external force (giving our power away).

It is blatantly obvious that the powers that be are doing their up-most to keep us in fear mode.  How they will use the alien equation to feed fear is open to debate.  But they are seeding our minds with gross alien violence in a very open way, by our entertainment industry and news items.

Now, if any spaceship lands in your backyard and beautiful being come out and invite you their mothership in order to save you, make sure you ask for their Light ID. Ask them if they work for the light.  If they don’t answer the question, but instead give you an ultimatum or warning of things to come, then ask them politely to get off our planet.  I can assure you that no light being will offer another to “save them”.  However, if they are offering to take you for a ride in their latest Model X spaceship, temptation might be too great to say NO, so ask them to come back in January 2013.  If they have your best interest at heart, they will.  If they tell you this is your only chance, don’t forget what your mother told you about getting into stranger’s cars, even if they do have alien puppies in there.  Any ultimatum is fear based, and not advisable to comply with.

Nothing can stop our ascension if we do the necessary work on ourselves. Nothing. So, aliens or no aliens, it doesn’t matter, it is irrelevant. Our collective is ascending and nothing can stop an awakened and fearless person from getting the full benefit of the personal, collective and planetary ascension process that is happening right now.

You may also like: Alien UFOs exist  And this is why the Government won’t let you know about them