I am a victim!! – A link in the Chain of Enslavement 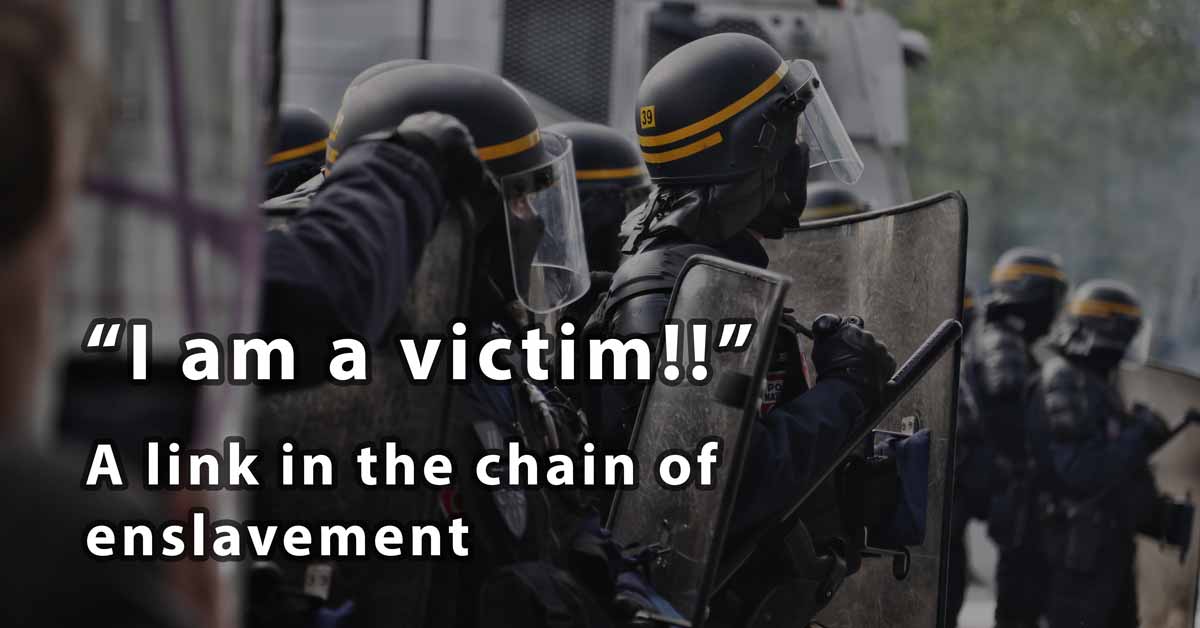 The victim/aggressor cycle is another link in the chain of enslavement.

It is so severe that most individuals are completely unaware that their life is a constant cycle of either being a victim or being an aggressor.

When being a victim they have, of course, someone or something to blame for what happened to them.  And when being an aggressor, they too have blame to give or receive.

Attached to the cycle, is the energy of “savior”.

From before birth, to my mid 30s, I experienced a lot of physical, emotional and psychological aggression. It was highly orchestrated and persistent. The aim was to either enslave me as an aggressor or victim, or take me out. It didn’t work in that I never identified with either role. It was simply experience.

There were a few times when the pain was so excruciating that I decided to die. I learned two things, one was that my higher self was not letting me die, and the other was that all I had to do was to stop the aggressor by either removing myself from the situation, or removing them from my environment. What was not an option, was to engage them in their game by either feeling victimized, allowing the aggression to continue or becoming an aggressor myself.

It is very important, as we move into the new paradigm, to realize that we are in charge of our experience on the planet and beyond. That we decide what we agree or not agree with. And so are the “victims” and “aggressors”.

Many individuals, when they read that, think, “what about the innocent child who was raped and murdered? He/she did not choose that!”

There are many layers to that thought. One is that if we think that, we are stating that the child is not a complete, divine, infinite entity who chose to come to Earth to have that experience with the perpetrator of killing and raping. We declare ourselves superior to that child’s singularity construct.

Another is that by sending the energy of “victim” to that child (alive or dead), we are strengthening the cage of “victim-hood” in that entity’s life, making it harder for him or her to get out of the cycle. The same thing applies to the perpetrator.

By thinking of someone as a victim or aggressor we lower their vibration. The chains of enslavement are made of “low vibration”.

Yet another layer is that, yes, at a certain level we all chose to come in and forget we were unlimited and divine. And also agreed to enter a planet that had a very powerful victim/aggressor structure in place. Just watch a history show on TV and you will see how established in time, and prevalent, this program is on the planet. This strengthened our point of agreement in “experiencing” these type of situations either as participants or “observers”.

Does that mean that if we see people fully engaged in the cycle we do nothing about it? No. They came into our awareness because they want out of the cycle now. They are ready to leave. Both the victim and aggressor are “done”.

So, we disagree with this particular cycle. It has no place in the new paradigm. Anyone who wants to continue in that cycle, can go elsewhere.

We process all the strong emotions that come up when we see individuals in this cycle, and, once those emotions are fully integrated back into Oneness, we state our vote:

“victim/aggressor person, you are an infinite, divine being, you can, and are able to, move into a new empowered experience and break free from the victim/aggressor cycle. And if you choose to not move past this cycle, you are not welcome to experience it in my reality as I do not agree with it.”

And then, move out of the way, and allow light and love to infuse that person/s.

Another layer is that this cycle is being used by the “powers that were” to keep the masses enslaved. Making it hard for ordinary folk to move past their own victim self or aggressor self.

The “elite” create conflict, wars, “terrorists“, gestapo like violations at airports and other locations, and they are also very much involved in recruiting servants via the use of physical torture to force individuals to commit acts of the ultimate aggression, which is to take a life (either their own or someone else’s).

By perpetuating the cycle, and making it “normal”, they strengthen an environment filled with drama and fear, which are very tasty to low vibrational entities.

So, we look at the elite as a group, or focus on an individual and say:

“[Mr. President] you are an infinite, divine being, you can, and are able to, move into a new empowered experience and break free from the victim/aggressor cycle. And if you choose to not move past this cycle, you are not welcome to experience it in my reality as I do not agree with it.”

And then we step out of the way and allow Source to use us to send light and love to that group or person.

Interesting question, when you read “Mr. President” there, did you see him as a victim or an aggressor?  When someone is deep in the cycle, it is hard to see where one role ends and the other begins.